Ranking for Featured Snippets on Google: Everything you need to know

You might be very familiar with featured snippets, or they might be something you’ve never heard of. Either way, I guarantee you will definitely have seen lots of them in Google’s search result pages. This guide will give you a thorough overview of featured snippets and hopefully help you understand how they can occur and what you can do to improve your chances for your website(s).

What is a Featured Snippet?

Featured snippets were first introduced by Google in 2014. They, in most scenarios, are an extracted piece of text from a given website that aims to answer a user's query that they have typed into Google search. It appears in a box above the traditional organic listing format (results 1 - 10) and shows an extracted piece of information from a webpage followed by a link to where it took the information from. Some people often refer to featured snippets as “position 0” as it's above position 1 in Google search results pages.

Below is an example of how a featured snippet looks on mobile. I’ve asked Google “how long does an egg take to boil” and the featured snippet at the top has given me the information which is taken from a recipe from egginfo.co.uk 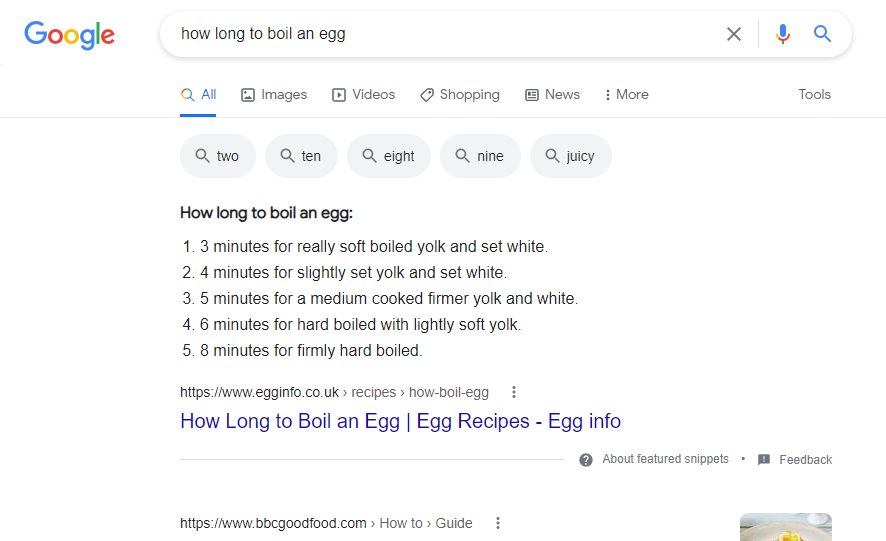 You can see that the featured snippet area is right at the top of the page, before recipe carousels, the “people also ask” section, and the start of traditional organic listings.

How does Google choose a featured snippet?

According to Google, “We display featured snippets when our systems determine this format will help people more easily discover what they’re seeking”. I’ve seen Google use featured snippets for many different queries; recipes, financial information, definitions, information on individual people, and much more. In 2018, Google announced it would sometimes show two featured snippets consecutively where the query might have two separate intents. However, I don’t think I’ve ever seen these (Google UK search).

Google does not reveal in detail how it selects a featured snippet, so there is no secret to declare here. BUT in trying to understand how Google selects them, I would think back to what Google recommends when talking about the quality of content.

Page quality is a factor

There are extensive guidelines around “producing quality content” which you can find from guidance written back in 2011 by Amit Singhal. I’ve pulled some of the points mentioned in the guidance from Amit, which I feel are particularly (not limited to) important for featured snippets especially:

Now, if I wrote and recommended this a few years ago, I would have got laughed at because Google got so many featured snippets wrong, but now, the quality of them is of a much higher level of accuracy, thanks to Google’s latest AI model; MUM (discussed later).

The different types of featured snippets

There are several different types of featured snippets. Depending on the intent, Google will try to use the most appropriate format to help users get to their answers quickly. By understanding intent, you will see that featured snippets appear for phrases where you might not actually expect them to occur.

Here are some examples: 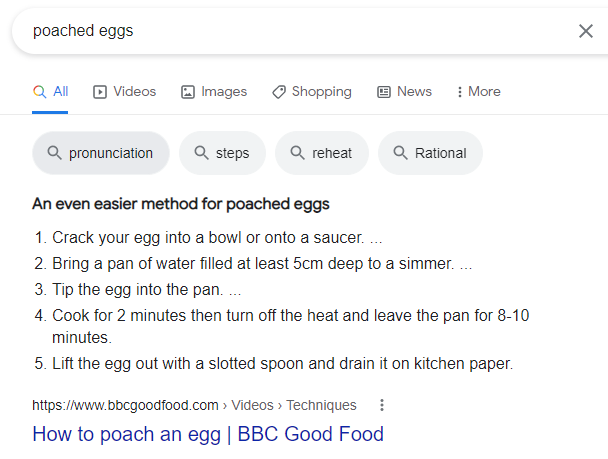 Where Google identifies a query that will be satisfied with quick information, it will display a featured snippet in the form of text/paragraph. Clearly, the intent above is to look for the horsepower of a specific car. 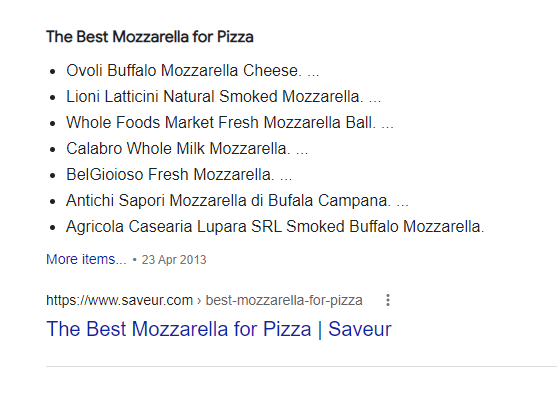 A search for the best mozzarella cheese to use for Pizza yielded a bulleted list. Personally, I don’t find this result informative enough, so I would have to click on the snippet to find out more. I don’t think this is a great result. 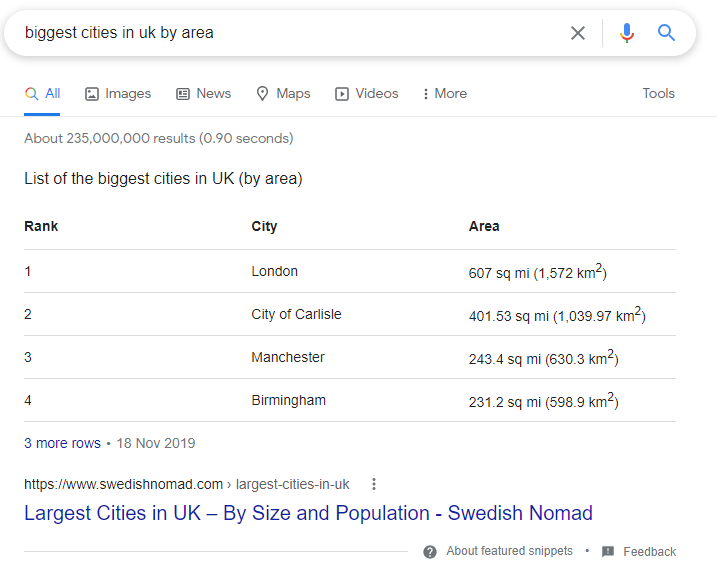 Google has directly taken a table from the web page and displayed it as a featured snippet result in the above example.

You might have seen these when doing broad “best” or “top” related searches. Google is using entities to show information gathered about a specific entity. If I click on “London” at the top, Google will then pull in additional information below in search about London, including a knowledge panel

There is no one size fits all model for snippets, and I like how Google tries to give an appropriate method to display the information.

In general, I never encourage trying to spot a pattern with how certain things might work in search engines, especially Google; there are way too many variables at play. It's not necessarily causation, but probably mostly correlation. I’ve seen many statements regarding featured snippets in how to “get them” but I see a lot of evidence that contradicts them.

In some guides, it advises that you definitely need to start a section with a H2,3,4,5, or 6 heading and then write your information underneath, which makes you eligible for a snippet. This is not always the case. Let's take one of the examples above, which shows the “best pizza for mozzarella”. If I look at the source code of the page, the sections are actually written as paragraphs, with no headings present.

It is, however, true for the other examples I’ve included above, where there are headings present. Still, again, it's obviously not an essential factor, given the <p class> we can see above.

So, headings are not necessarily essential.

Answer a question or statement directly

I’ve seen some recommendations to answer questions or statements directly i.e. keyword research shows e.g. “BMW M5 horsepower” as a keyword that triggers featured snippets, so start the section as “BWM M5 horsepower” and address it directly. Again, this isn’t a guarantee.

If we look at the featured snippet for “BMW M5 horsepower”, it's actually pulled from a well-written piece of content (remember, page quality!):

The information above is written really well. It has its own tone, is informative, and is not written with SEO or featured snippets in mind. It's written with the user in mind, giving them thorough, useful information.

Some lessons here, which I will delve into below.

What are the important factors which potentially help in getting a featured snippet?

I’ve been working with writers and content teams for a long time, and I’ve seen a lot of featured snippets achieved (it was never intended for them to be achieved either). There are some general ground rules I set when briefing content:

Essentially, it's following the guidance from Amit Singhal, who wrote a guide on building “high-quality content”

If the above is achieved, I believe that the chances of getting a featured snippet are increasing, and there are a few more points I’d add to help:

How to get featured snippets

There are no guaranteed techniques that always work as Google evaluates much more than just a snippet of a paragraph. It's important to remember that aiming to produce a high-quality page of content should always be the key focus.

John Mueller confirmed something similar on Twitter in April 2022:

Given that there's no technical method of achieving that, this seems somewhat futile as a primary goal. I'd recommend focusing on other things which are more related to what's really useful for the site / business.

What are the benefits of featured snippets?

What does it mean to rank at position 0? The biggest difference you will see is the click-through rate. Below, I’ve got an example of a term that ranks for a featured snippet: 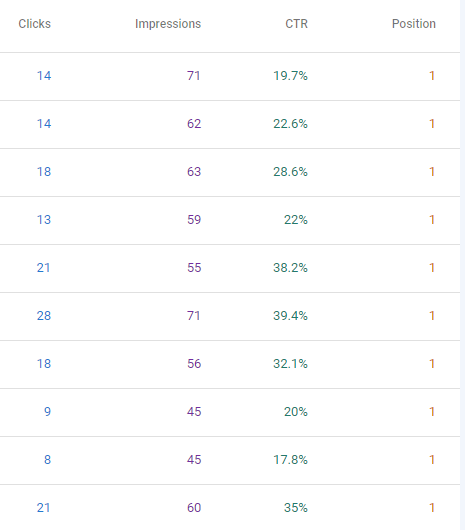 CTR is huge, almost up to 40% in some instances. It makes a lot of difference to the number of clicks.

Another example of a different term, again looking at the data daily. Not as high as the previous example, but still high. 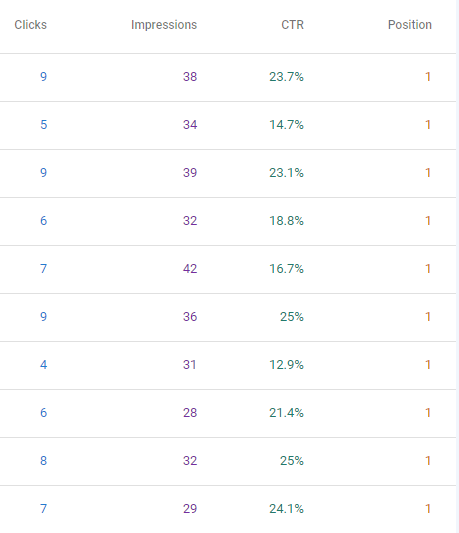 To compare against a term with similar impressions (not the same term), you can see a huge difference in CTR where terms are ranked in the middle of page 1. 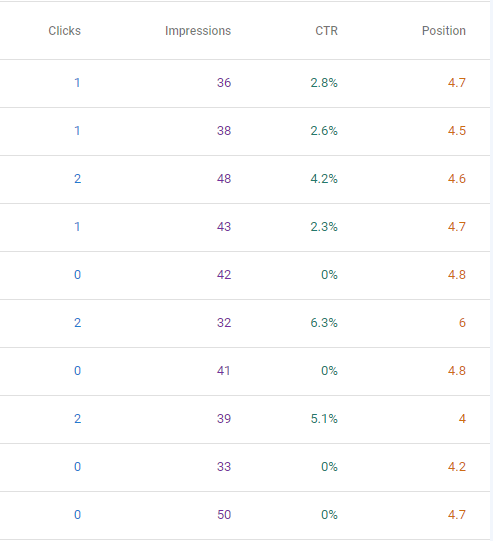 There have been a lot of studies by 3rd parties who talk about how featured snippets are actually taking traffic away (0 clicks) due to people finding their answer on Google and not needing to click onto the result. I think this varies massively based on the subject and intent. I’ve worked in the interior design space and personal finance, and both (more so personal finance) require detailed explanations on given subjects which means “0 click” is probably less noticed as it's likely a searcher will need more information. Where I’ve seen featured snippets earned, there is a tangible difference in organic traffic increases, which is clearly driven by the increase in click-through rate earned through a featured snippet.

Every topic is different, and I can see where featured snippets will give users answers immediately and the user might not need to click. Don’t let this put you off from the potential of achieving featured snippets though.

Updates from Google on Featured Snippets

Google has continued to evolve Featured snippets ever since they were introduced in 2014. Some changes include:

Some of the most impactful changes have come in recent years.

In 2020, Danny Sullivan confirmed on Twitter that where a website has featured a snippet for a term, it won’t have the same URL appearing for the same query in normal search results. This means that if you have a featured snippet for that given query, your website won’t also appear further down in search results. I remember when this change kicked in for a website that I worked on, we previously had A LOT of featured snippet results combined with position 1 listings, and this change made a huge difference to traffic.

This year (2022), it's been spotted that Google is continuing to test them with more big changes. @williamalvarez and @brodieseo gave examples on Twitter of Google testing multiple different answers in a snippet. I actually like this test, and I hope it stays. Often, not all answers are the same, even for something like “how to boil an egg”. It also gives a balanced view from Google for queries that are not straightforward to answer.

Yep, Google is doing more testing with showing multiple answers within Featured Snippets. We saw it back in April on desktop, now there's three new variations on mobile. All spotted by @williamalvarez via @rustybrick. Thoughts on this test? More info: https://t.co/j6IUtkB6Zz pic.twitter.com/GufAr00gtr

Google announced the most recent change for featured snippets on August 11th 2022.

They confirmed that MUM ( Multitask Unified Model; Google’s latest AI model) will now power featured snippets to help drive a higher level of accuracy and lower the possibilities of misinformation. The AI model will check its quality and accuracy for an answer to a featured snippet against “other high-quality sources on the web” to find a common agreement.

If I’ve not made it clear above, there is no code to use to get a featured snippet, BUT, there is code if you don’t want your website ever to feature in snippets. Not sure why you would want this activated, but in case you do, Google have a guide on restricting information shown on results pages, including featured snippets: https://developers.google.com/search/blog/2019/09/more-controls-on-search

Hopefully, you have found this article informative, giving you a balanced and honest view of featured snippets. My aim is never to drive false promises; this article won’t guarantee anything, but I hope it will encourage article writing to be about helping the user rather than concentrating on 2 / 3 paragraphs within.

Algorithm updates from Google attempt to assess the quality of content, especially “Google Core Updates” and the newly announced “Useful Content Update”. The useful content update especially targets websites that “focus on search engines first”, meaning websites that obviously focus on keywords and are written to a very low standard may fall victim to this update. It's really important to think about featured snippets as an opportunity for well-written quality pieces of content to appear in the number 0 spot. I would never recommend taking any shortcuts, and I personally think that there are a lot of misguidances that recommend websites target featured snippets by applying e.g. “x, y, and z”.